What’s really behind ‘the cost of living crisis’?

BRISTOL 18May22 by Tony Gosling – The cost of living crisis meme is being circulated by the London media since late summer 2021 to describe the disposable income squeeze. Basic costs like food and energy are projected to increase from anything between 25% and 150%, while wages are effectively frozen. On top of that, overall inflation is now 11%, so real wages are falling fast. A rude awakening for tens of thousands every week working all hours God sends but unable to pay the bills.

But the increase in fuel and gas prices cannot be put down to ‘Russian sanctions’ or even the fact that Asia is buying more tanker-borne US Liquid Natural Gas (LNG). If market forces were behind these price hikes we would have not seen the skyrocketing of annual Shell and BP dividends, with combined annual profit now at around £50 billion. Not turnover, PROFIT! Its just good old commodity price fixing. Please, no windfall tax. These utilities need to be regulated back into public ownership. So the poor too can share in their success. Now.

Over millennia, the banksters and the racketeer rentiers they sponsor have sought to capture every institution that opposes them by trapping the target in debt servitude. Thomas Cook Travel, Four Seasons Healthcare, BHS, Laker Airways, even the mighty Carillion, all died this way  Most of the developing world, with the notable exception of Gaddafi’s Libya, has been laid waste by unpayable debt. Now it’s our turn. And with the national debt now well over £2 trillion the British state is succumbing fast. A crash is inevitable. We need to ready Plan B’: To, over a year or so, make life’s essentials free.

The obvious principle is to gradually share Britain out so we all have a roughly equal share of the country. But no, even if those who own a tiny plot and haven’t had to sell it to pay for elderly care, still have a home, many, even on ‘the left’, think its cool to take that 16’x80’ plot off the elderly when they die.

Many blame Theresa May’s attempt to float a ‘Dementia Tax’[1] in the 2017 general election for her losing the Tory majority. But Labour went much further in proposals to make more of us landless. Corbyn’s shadow chancellor John McDonnell, with adviser Richard Murphy and others proposed the Lifetime Gifts Tax (LGT) in the pre 2019 general election ‘Land For The Many’ report. George Monbiot, Prof Richard Murphy (Tax Research UK), Robin Grey (Three Acres and a Cow), Tom Kenny, Laurie Macfarlane (New Economics Foundation), Anna Powell-Smith (Centre for Policy Studies), Guy Shrubsole (Who Owns England), Beth Stratford (New Economics Foundation) and others endorsed this wheeze, despite it raising the number of Brits slated to lose homes on the death of a parent (unless they had substantial savings to pay the tax) from 650k, up to 10 million![2]

LGT would prevent anyone with a home valued over £450k handing it on to their children but the AVERAGE house price in London is £750k, meaning LVT could precipitate vast ‘social cleansing’ of around 80% of homeowners from the capital. And as the housing bubble inflates ever further even those with tiny homes would be unable to gift them, either in life or death. The buck stops with this great land grab from the people with editor-in-chief George Monbiot ‘Land For The Many’ should have been titled ‘Land From The Many’!

Contributor to the Land For The Many report, Professor Richard Murphy, was contacted for his response to press reports[2] saying the Lifetime Gifts Tax could bring twenty times more homeowners into inheritance tax bands which mean they could lose their homes. His response was ‘If that’s what you think, I have nothing to say to you’, and put the phone down.

In ‘Who Owns Britain’ (Ireland, The World) author and former Sunday Times Rich List land specialist Kevin Cahill explains the British people did a pretty good job post-WWII clawing back land and homes from the historic land rentiers. Individuals now have more land than at any time since the enclosures. Does the ‘to each according to his need’ crew really want to stop us passing family homes on? Driving the poorest half of homeowners back into the landlords’ clutches? Do they really believe HSBC or the Rees-Mogg state should own everything? 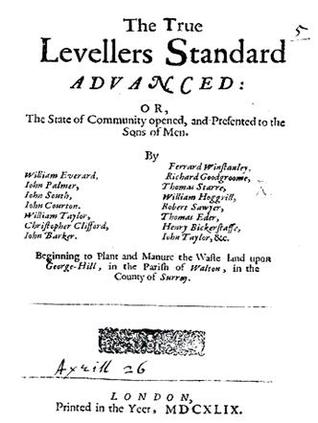 Gerrard Winstanley and his 1649 Diggers or ‘True Levellers’ raised key questions over private land ‘ownership’, but the rentiers who convince themselves they own this world are waging a secret war through left NGOs on our right to pass on to our kids the basic means to live. LVT campaigners even think homes, market gardens and smallholdings should be taxed. Forced into the money system to boost GDP. No. Genuine Socialists know you tax luxuries and bloated estates, never necessities like a modest self-sufficient parcel, under a few acres of land.

Like Prince Charles and Klaus Schwab the ‘Deep State’ in the City of London want the ‘New Normal’ to see us and our children all living in fear of eviction by them, because that makes us their slaves. Sensing blood Lloyds bank has declared its aim to become the UK’s biggest homeowner by 2030.[3]

The 1947 Universal Declaration of Human Rights spells it out; ‘Everyone has the right to a standard of living adequate for the health and well-being of himself and his family, including food, clothing, housing, and medical care and necessary social services, and the right to security in the event of unemployment, sickness, disability, widowhood, old age or other lack of livelihood, in circumstances beyond his control.’ That means an ABSOLUTE RIGHT, even if we can’t pay the rent.

No. we need to extend family land ownership, or an inalienable right to council housing, and gradually get every household their own home with security of tenure for them and their children. Not tax home owners out of existence. That’s why our ancestors invented the ‘copyhold’ tenancy and why the Victorians extinguished it. It made it impossible for a house to be loan collateral and forfeited, guaranteed it would be passed on.

So. lets reduce every family’s living overheads to zero. The real debt is the land the state, feudal barons and banksters stole from us and now they owe us. Tory or Labour, the rentiers love it when we’re landless because we have to pay them every day just for the right to be. That, also, is why neo-Nazi Priti Patel is criminalising gypsies and travellers. There but for the grace of God, go all of us.

If it goes on at this rate Prince Charles and Klaus Schwab will indeed get their way and we will own nothing at all, and they’ll probably put low-grade MDMA in the water, to keep us happy!

Ignore the ‘value’ of the land for a minute. Ground clearance, services, foundations, materials and labour to build a three bedroom house, with a life of around 200 years, comes out around £100,000. That’s under £10 a week. The mystery 95% is pure profiteering. The real ‘cost of living crisis’ post globalisation, is the capitalists don’t innovate any more, just clamour to get their precious returns, off our basic essentials.

The most successful challenge to the British crown’s empire-winning landlessness strategy, to keep the poor on their knees, was in 1880s Ireland. Holding the balance of power, the Irish MPs of the 1880s teamed up with Michael Davitt and the Irish Land League to prize out of the government a series of acts of parliament converting the famine-era rack rents into title deeds for the old tenants. Government loans meant they could buy the land and build a decent farmhouse to replace their hovel, on almost every one of the Catholics’ modest holdings in the south.

Overnight, the desperate conditions of tenant farmers who’d been at the mercy of the absentee landlords’ factor, was transformed. And the loan repayments were a fraction of what the old rents had been. We need to take a leaf from the Land League’s book, to rid the land of these parasitic landlords once and for all, and convert those rents to housing cooperatives, tenant run housing associations or purchase agreements.

The Land Is Ours was set up in 1995 by writer George Monbiot with the aim to echo in the UK land rights campaigns across the developing world, notably Brazil’s landless movement (MST). Also to take up the cause through non-violent direct action of forgotten Diggers, Chartists and Land Leaguers on our own islands. You can find us online at www.tlio.org.uk and join the Diggers list, set up in Easter 1999 when we occupied St George’s Hill,  Surrey for two weeks on the Diggers’ 350th anniversary, by sending a blank email to diggers350-subscribe@gn.apc.org

Land is a free gift to mankind so should never be considered private property like other things. ‘True Leveller’ Gerrard Winstanley said ‘The Earth is a Common Treasury for All, Without Respect of Persons’. Winstanley died a Quaker and the Bible puts it thus: The land is not to be sold permanently, for the Earth is mine, sayeth The Lord God, and you are but my tenants. Leviticus 25:25.

One thought on “Pay No Rent! How to permanently fix the UK’s cost of living crisis – Labour’s ‘Land From The Many’ Report”

This site uses Akismet to reduce spam. Learn how your comment data is processed.

The Land Is Ours

TLIO campaigns peacefully for access to the land, its resources, and the decision-making processes affecting them

a Landrights campaign for Britain